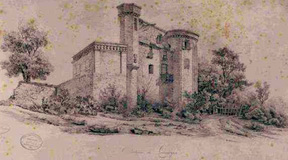 The oldest in the Médoc region, Château de Lamarque is almost a thousand years old. The family history dates back to when Garison de Lamarque built the original fortified castle between 1050 and 1090, to protect the region from Viking invasions.
Meanwhile his cousin, Gaubert de Fumel, was taking part in the Crusades. The story of the Lamarques and Fumels continues today. In fact, Georgine de Fumel, the Marchioness of Evry by way of marriage, is the grandmother of Pierre-Gilles Gromand d’Evry who today is responsible for the future of the château’s vineyard.

The vicissitudes of French history led to the family having to leave Lamarque during the Hundred Years’ War, meanwhile Henry V of England became the owner and the Duke of Gloucester became its resident (1414 to 1447). When the region was returned to French rule in 1453, the renowned Maréchal de Matignon started living at Lamarque, and it is said that he later died there from a stroke following a heavy meal with lots of wine!

The Lamarque vines have existed since the 15th century. At first, the wine was produced only for the château itself. Professor Pijassou has verified its existence and it is recorded on a map of Beylleme from this period.

The return of the Fumel family back to Bordeaux soil, while still keeping their stronghold in the city of Fumel, saw them, from the 16th century, in turn and even concurrently, become owners of some of the most prestigious crus: Château Haut-Brion (until 1801), Château Margaux (until 1811) and Brane-Mouton (until 1853) which went on to become Château Mouton Rothschild. Furthermore, up until the beginning of the 20th century, the family owned La Tour Carnet, Meney and Barrault .

One of the sole survivors of the French Revolution, Jacques -Pons de Fumel (Knight of the Order of Malta), a cavalry officer, decided to re-establish our family in Médoc back where it all began: le Château de Lamarque.  He is the great, great grandfather of Pierre-Gilles. Between 1839 and 1841 the vineyard grew to a sufficient size fit for agricultural operations.

At the beginning of the 20th century, following further vicissitudes of history that affected the family such as wars, activity at Château de Lamarque was put to rest, and she lay like Sleeping Beauty...
Driven by Marie-Louise d’Evry and her husband Roger Gromand, the 1960s heralded the reawakening and a true "Renaissance” of Lamarque. Through new plantings and renovation work they were able to develop new facilities adapted to suit the times.

Following this historic ‘Renaissance’, Pierre-Gilles and Marie-Hélène Gromand brought new energy to the project by rethinking the basics: respecting nature, ensuring that the quality of the grape varieties and their rootstock are adapted to the soil, and a slow wine making process with a long maturation period.
They are the 25th generation from this family’s long story and the 7th generation to look after a vineyard in this exceptional 48-hectare estate, carrying the Haut-Médoc appellation, the regional appellation incorporating smaller communal appellations.

Château de Lamarque can be considered, within this prestigious and sophisticated club, as equivalent to its renowned peers, the Grands Crus Classés.